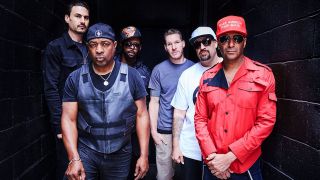 Tom Morello has revealed that Prophets Of Rage are planning to record a second EP in the coming months, and back it with further touring.

And bandmate Tim Commerford says they’re planning to launch two EPs every year for as long as they can.

The supergroup, featuring members of Rage Against The Machine, Public Enemy and Cypress Hill, formed earlier this year to take direct action during the US presidential election.

Morello tells Loudwire: “It was a band we put together because the times demanded it – but I think the band transcended that original mission.

“It was probably the most fun I’ve had on any tour. We rocked people hard. In 2017 there will be new music and there will be a lot more shows.”

Bassist Tim Commerford adds: “It was never meant to be a one-off, or ‘we’re just doing it for the election.’ I understand why people may think that, but that’s not the case.

“We already have studio time booked. We’re going to make another EP – it’ll be at least five, maybe six songs that are all originals.

“The dates in the studio are a few months from now, so we have time to think about riffs and catchphrases.”

He says Prophets Of Rage are aiming to release another EP every six months. “We need to make our catalogue balance against Rage Against The Machine, Cypress Hill and Public Enemy.

“Right now it’s not balanced. We have a lot of work to do. I’m very confident that, in the next year or two, people are no longer going to be looking at this project as a super karaoke band.”

Prophets Of Rage have already confirmed a number of dates for next year – see them below.

How Rage Against The Machine predicted President Trump