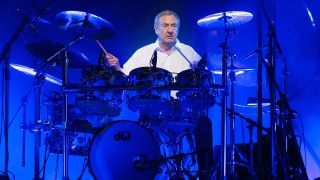 It’s titled A History Of Music In Technology and explores “the world of legendary artists, producers, engineers and inventors.”

The series also take a close look at innovations that have changed the musical landscape, including the electric guitar, drum machines, samplers, synthesisers and the evolution of the recording studio.

Lecturer in music at The Open University, Dr Sean Williams – who is also one of the series’ academic consultant – says: “This series is hugely ambitious in that it covers such a wide range of different music and traces some fascinating connections between different technologies.

“You can discover the history of sampling: How experimental French radio is connected to hip-hop, why Steve Vai’s guitar has a hole cut in it, how a budget portable church organ changed popular music, and many, many more fascinating stories – many of them told directly by the people involved using new interviews or archive recordings.”

A History Of Music In Technology is broadcast on Saturday mornings at 11.06am and will run through June 22.

The Open University has also produced free resources and materials to go along with with the series, including an interview with Nick Mason. For further information, visit the programme’s website.

Last week, Mason attended a ceremony at London’s Buckingham Palace to receive a CBE in recognition of his services to music.