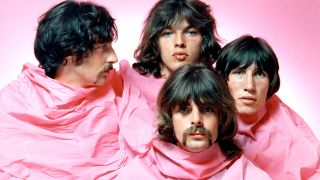 It’s been announced today that a mono remaster of Pink Floyd’s second album A Saucerful Of Secrets will be released to mark this year’s Record Store Day on April 13.

It’s been remastered by James Guthrie, Joel Plante and Bernie Grundman from the original 1968 analogue mono mix and will be presented on heavyweight 108g vinyl.

It’ll also come with a black poly-lined inner sleeve, along with a reproduction of the original sleeve, including the Columbia logo.

Pink Floyd releases on Record Store Day have become a regular feature, with a 12-inch of Interstellar Overdrive arriving in 2017, while The Piper At The Gates Of Dawn marked last year’s event.

To mark the announcement, a video for Let There Be More Light – the opening track on A Saucerful Of Secrets – which was filmed on the London underground in 1968 has been released.

This year’s Record Store Day’s ambassadors are Pearl Jam, with the day bringing together hundreds of independent record shops for a celebration of music and vinyl.