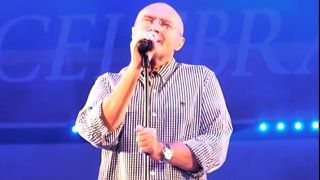 Phil Collins took to the stage this week for the first time since admitting he wanted to end his retirement.

In November he revealed plans to end his self-enforced exile from music, saying: “I’ve started thinking about doing new stuff. Some shows again, even with Genesis – everything is possible.”

On Wednesday he appeared at Miami Country Day School and performed In The Air Tonight and Land Of Confusion with students of the establishment. View the audience video below.

Collins appeared healthy and happy, starting his appearance with: “How are you? Hello and thank you for having me.” He admitted he’d felt nervous before joking: “Getting kids to play is one thing – getting them to shut up is another thing.”

Later, as the band took time to arrange their performance, he called: “Talk amongst yourselves.” Encouraging the students to take a bow after 17 minutes on stage he said: “They’ve earned it.”