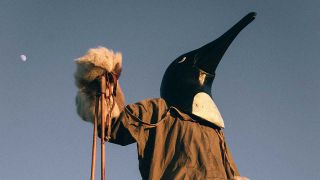 Penguin Cafe will release their new album Handfuls Of Night through Erased Tapes on October 4.

The new album, the follow up to 2017's The Imperfect Sea, has been inspired by mainman Arthur Jeffes personal journey following in the legendary explorer Scott’s footsteps in the Antarctic.

"This record started with a core of pieces I wrote specifically about penguins in the Antarctic for a project with Greenpeace in autumn 2018," Jeffes tells Prog. "There are four native Antarctic penguin species – each with their own individual characteristics and natures. I carried on from there to envisage a whole anthropomorphised world, where these penguins had narratives and adventures that we soundtracked.

“In 2005 I was asked to join an expedition re-creating Scott’s last Antarctic trip in 1911 for the BBC, using the same Edwardian equipment. I’m no explorer but I was keen, especially as there’s a family link – Scott was married to my great grandmother before she married my great grandfather. Antarctica by this stage being a protected environment, we swapped to the Arctic circle where we spent 3 months on the Greenland ice sheet, first dog-sledding and then man-hauling just short of 1000 km at 10,000 feet, across ice fields and glaciers.

"I had lots of time to ponder my life back home. It was then that I decided to get my Master of Music degree and focus on composing music, and also then that I realised that even in the most remote silent places, music can still be a huge part of one’s internal world and imagination.  Whilst on the expedition. I spent days playing things back in my head and also writing new things, which I would then try and write down at the end of the day.”

Handfuls Of Night can be pre-orderd here.