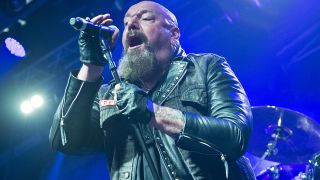 Former Iron Maiden singer Paul Di’Anno has admitted that the band were right to fire him.

Di’Anno, who fronted the metal legends on their self-titled debut album and its follow up Killers, left the band in 1981.

Speaking exclusively in the current issue of Metal Hammer, Di’Anno says:  “I don’t blame them for getting rid of me. Obviously, the band was Steve’s [Harris, bassist] baby, but I wish I’d been able to contribute more. After a while that got me down. In the end I couldn’t give 100 per cent to Maiden anymore and it wasn’t fair to the band, the fans or to myself.”

Di’Anno was reportedly fired over his party-heavy lifestyle. The singer has admitted in the past that he was snorting cocaine “non-stop. 24 hours a day.” He was replaced by Bruce Dickinson.

Di’Anno tells Metal Hammer that he’s still proud of the two albums he made with the band.

“The two albums I made with the band were pivotal [to the metal genre]. Later on in my life when I met Metallica, Pantera and Sepultura and they told me that those albums were what got them into music, it made me incredibly proud.”

You can read the full interview in the current issue of Metal Hammer, on sale now.

The UK event will take place at Stoke Prior, Bromsgrove, on August 28-30, with Di’Anno teaming up with former Iron Maiden members in Ides Of March to take his final bow, which has been brought about by health issues affecting the vocalist.

In 2014, Di’Anno underwent knee surgery and in 2016, he exclusively told Classic Rock that he had an operation to remove a non-malignant “rugby ball-sized abscess” from his lungs.

Di’Anno says: “It's been a tough four years waiting to play again. I hope to be standing for this show and I'm really looking forward to it. Standing up would be great. If not, Hell on wheels coming to ya!”