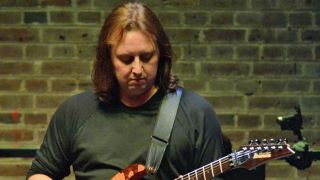 Panic Room have confirmed Steve Rothery Band guitarist Dave Foster will join them for their upcoming touring and recording commitments.

The Welsh prog rockers parted ways with original lead guitarist Paul Davies in 2013 and brought in Adam O’ Sullivan on a temporary basis.

Now Foster – who also works with Mr So & So – is onboard for 2015 and will play live with the band in April and May and also record their upcoming fifth album.

In a statement, the band say: “Panic Room are preparing to unveil a powerful live show which will celebrate the finest and most-loved music from across all four of the band’s award-winning albums.

“Each event will feature a full electric set plus an exclusive acoustic set, and we are very excited to welcome Dave aboard for these shows.

“He will also be part of the recording line-up for Panic Room’s fifth studio album, which we plan to begin later this year. He’s a great all-round musician, who is equally gifted on the electric and acoustic guitar, and fans lucky enough to have heard Dave play with the SRB or Mr So & So will already know some of what he’s capable of.

“And in addition to his musical skills, he’s also a really lovely guy.”

Dates for the April/May tour are still being finalised and will be revealed in due course.