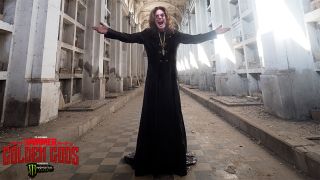 Ozzy Osbourne has been named this year's Golden God, and will be presented with his award at this year's Metal Hammer Golden Gods, in association with Monster Energy, ceremony in London.

Taking place at the Indigo in the O2, London, on June 11, Ozzy follows in the footsteps of previous Golden Gods recipients including Lemmy, Dave Mustaine and Rob Zombie.

"What an immense honour it is to be getting a second Golden God Award after Sabbath picked one up last year," says Ozzy. "The fans who have supported me and this music mean everything to me, which is why getting this award is so special. I will see you all down there."

“It just doesn’t get any bigger than this,” says Metal Hammer Editor, Merlin Alderslade. “The Prince Of Darkness, the most iconic name in heavy metal, a man without whom these very awards, this very magazine – hell, our very culture – would quite simply not exist. Seeing Ozzy walk out on that stage at the Indigo on June 11 is going to be unmissable. We can’t wait to share what will be a very special moment with you all. All aboard!”

Ozzy Osbourne is currently on his final tour, which includes a headline spot at Download festival. Forming the genre-defining Black Sabbath in 1969, his career spans almost 50 years and is undeniably the biggest star in all of heavy music.

Tickets are on sale now for the Metal Hammer Golden Gods, which will also feature live performances from Baroness, Myrkur, Meshuggah, Carpenter Brut and a very special headline band still to be announced.