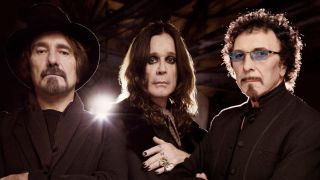 Ozzy Osbourne would like to see Black Sabbath’s farewell tour extended beyond its end next year – but he accepts it’s unlikely to happen.

And he’s preparing for the emotion to build up ahead of their last-ever concerts in their home city of Birmingham on February 2 and 4.

The band’s The End tour is currently moving through Europe, with dates to follow in North and South America, before a final run in the UK.

Ozzy tells Billboard: “We’re doing 80 shows – it’s good enough. I wouldn’t mind extending the tour for another few gigs. There’s a lot of people who won’t get to see us, but I don’t think it’s going to happen.”

He says of the tour so far: “It’s great. I’m having a blast with it.

“Right now I’m okay with it. I’m sure as it starts counting down to five shows left or something, it’s going to be kind of emotional.

“We started off as four guys from Aston who had a dream, and it came true beyond our wildest dreams. We were manipulated, ripped off, conned. We lost each other within each other. But it’s great to have got this back just to end on a high note.”

And the vocalist is looking forward to returning to his solo career once Black Sabbath bow out. “It’s not me that wants to retire,” he says. “I’ll be continuing my own musical thing.

“Being Ozzy Osbourne solo again is not a job – it’s the biggest, greatest love affair of my life.”

His wife and manager Sharon said last month that the 67-year-old would retire before he was 70, commenting: “I don’t want Ozzy singing Crazy Train at 75.”