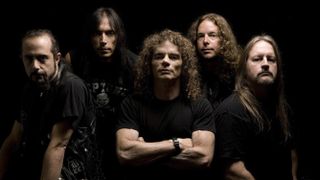 Overkill have announced details of their upcoming 18th studio album.

The follow-up to 2014’s White Devil Armory was produced by the band and mixed by Andy Sneap and will launch on February 10 after they signed a worldwide deal with Nuclear Blast last year.

The band have also released a lyric video for album track Our Finest Hour. Watch it below. The single is also available to purchase through iTunes and in a variety of formats from the Nuclear Blast online store.

Overkill have been on tour across Europe this month and have three dates remaining in Hungary, Austria and the Czech Republic over the coming days.

They released career anthology HistoriKill: 1995-2007 in October, which can also be purchased via Nuclear Blast.

The complete history of Overkill