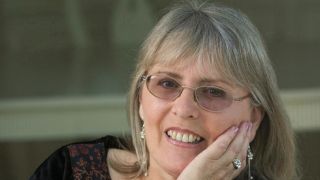 Dyble announced she was suffering from lung cancer in November.

"The mindless thing in my lung is malignant and is spreading it's tendrils far and wide," she said at the time. "So yes, I have lung cancer, and I start chemotherapy next week."

Dyble was an early member of the folk rock band Fairport Convention, originally hooking up with founding members Ashley Hutchings, Simon Nicoll and Richard Thompson. She appeared in the band's 1968 self-titled debut album.

She also worked with pre-King Crimson outfit Giles, Giles and Fripp, before forming acid folk band Trader Horne with Jackie McAuley, with whom she released Morning Way in 1970 as well as guesting on The Incredible String Band's 1968 album The Hangman's Beautiful Daughter.

Fairport Convention's Simon Nicoll said she was, "kind and gentle, shy but hilarious, wistful but focused".

He added: "Judy was ever a childhood friend to me first and foremost... She surrounded herself with loveliness, loved her kids and grandchildren, and adored her rescued greyhounds. Farewell, lovely. x"

Dyble recently announced that she will release an album with Big Big Train singer David Longdon in September.

“It is with great sadness that I write to say that my dear friend Judy Dyble passed away this morning," Longdon said this morning. "Judy and I became friends during the writing and making of this album. Along the way, there was much laughter and joy - but also challenging moments. She was a woman of a certain age and she wrote articulately and unflinchingly about the autumn phase of her life.

“She dealt with her illness with incredible courage and fortitude. She suspected this album was her swan song and she gave it her all. Judy reassured me that she’d had a great life. Which indeed she did. And I will miss her greatly.”

Prog Magazine knew Judy well and would like to our express our deepest sympathies to Judy’s family and, friends.