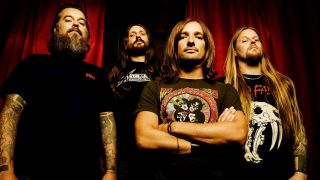 Orange Goblin have announced a 13-date UK tour to celebrate their 20th anniversary.

The band originally formed in 1995 under the name Our Haunted Kingdom but changed to Orange Goblin ahead of their debut album Frequencies From Planet Ten in 1997. Their most recent release was 2014’s Back From The Abyss.

Frontman Ben Ward told Metal Hammer: “We saw going professional with the band as going into the unknown. So the album was a reference to that, getting back from the abyss.

“It’s like a statement to say we’re still here – and we’re ready to rock again.”

Orange Goblin play at Bloodstock on August 6-9. Tour tickets will go on sale via Kililive and See Tickets on Wednesday (April 29).