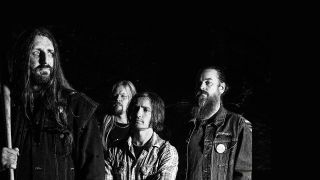 A funny thing happened to Orange Goblin on their way to oblivion. In 2012, after 18 years together, they released a last-gasp album, the ironically titled A Eulogy For The Damned. The band had spent nearly two decades in the trenches, plying their wooly, wide-legged stoner-doom jams far and wide, always returning to London after a few weeks or months to labour at day jobs and dream big rock’n’roll dreams that never quite came true. They were middle-aged, bedraggled, at the end of their collective ropes.

And then the album came out, and all hell broke loose. It ranked third in Hammer’s end-of-year poll, and the metal world at large was just as enthusiastic. It breathed new life into the creaky ol’ Goblin machine, propelling them to dash their civilian lives completely and hit the road with renewed vigour. The tours got longer, and the crowds got bigger. They headlined Bloodstock’s second stage and packed the place out. And the madness never ended. Two years later, and they’re about to unloose the crucial follow-up, a toothsome beast called Back From The Abyss. And as Goblin mainman Ben Ward tells Hammer, that abyss is exactly what you think it is.

“Oh yeah, it’s about the last couple of years,” he says. “It’s about being on the road for so long, which can be very trying at times. But also, we saw going professional with the band as going into the unknown. So the album was a reference to that, getting back from the abyss. The album is kind of like a statement to say we’re still here, and that we’re ready to rock again.”

‘Going professional’ is the dream of self-respecting metal bands, and one that seemed far-fetched for Goblin just a few years ago. So when the chance arose, the band was forced to weigh their options carefully.

“It was a very tough decision because we’re no spring chickens,” Ben laughs. “We’re all in our 40s, we’ve all got mortgages and children to support and wives to look after, as well. So, we had to weigh all the pros and cons. But we have very supportive wives and girlfriends who agreed to hold down the fort while we went away for months on end. They kind of pushed us into it, to a certain extent. It was a massive decision for everyone involved, really, but looking back, it’s been alright so far.”

It’s not only been alright; it’s been a remarkable reversal of fortune, especially when you consider that Eulogy For The Damned wasn’t just Orange Goblin’s seventh album. It was also, very nearly, their last.

“If the album wasn’t a success, I think we probably would’ve ended it,” admits Ben. “The band had been a hobby for so long. But it wasn’t just that album. In 2011, we did a tour with Gates Of Slumber and Naam, and the response we got from the US fans gave us a such a boost that we had to rethink our future. We thought, ‘There are people out there who think a lot of Orange Goblin. Maybe we’re doing something right.’ The success of the album confirmed what we thought, and made us not only keep going, but to decide to do it full-time.”

Coming after the huge success of Eulogy, Back From The Abyss is the most high-profile album Goblin have ever done. Sonically, it’s a blazer, accessible but lethal, a caveman’s club to the skull from start to finish. Lyrically, it seems ripped from Goblin’s diary over the past few years. While there are plenty of tributes to Satan and a few Lovecraftian creep- outs, songs like Ubermensch and The Devil’s Whip address the band’s seemingly endless touring cycle and their leap into full-time rock’n’roll professionals. It sounds like it was written on the road. You can practically smell the diesel fumes. And originally, that was entirely the idea.

“We had every intention of writing the songs on the road, but with us it never turns out that way,” sighs Ben. “We never get around to it. So in typical

Goblin fashion, everything was thrown together at the last minute. We did actually get together more often than in the past to write this one. We were meeting three days a week and writing in the studio and bouncing ideas around, but then I did some tour managing for Scorpion Child and left the guys to finish writing the music. That took us up to two days before we entered the studio to start recording. When we started the tracking, none of us had heard what any of the songs would sound like with the vocals and the lyrics. It was all written very last minute, but that’s worked in our favour. It’s got a great spontaneity, and sometimes you could be thinking up a vocal melody and the first thing that pops into your head is the best thing, because it’s the most natural. That was the case with this record. It’s very fresh-sounding.”

Another notable aspect of the new album is the striking cover, a painting of a doomed astronaut, his skull still in his smashed helmet, frozen in time on a lost planet. It’s chilling and effective and metal as fuck. It also bares a more than slight resemblance to Iron Maiden’s epic 15th album, The Final Frontier.

“It was more coincidence than intentional,” explains Ben. “With the album title, we wanted something very sci-fi themed. Obviously the astronaut skull being left on a planet is very synonymous with science fiction. We used the artist who did our first record because it was kind of a rebirth of the band. Doing this full-time and coming back from the abyss of touring, it came full circle, and I wanted to get Martin Hanford’s artwork again. When we told him the themes we wanted, that’s the idea he came up with. We did mention that it looked like Final Frontier, but so what? It’s a striking image and it’s almost a homage to Maiden, being from the same part of London they are, and obviously they are idols and heroes that we look up to. I’m happy with it.”

Doubtless the fans will be too. Of course, the question remains: how to maintain the momentum? With no day jobs for the guys to fall back on now, the safety nets have been snipped away. It’s do or die time, all the time, from here on out.

“Yeah, we’re aware of that,” chuckles Ben. “We’re all itching to get back out, but there’s a strategy in place. If you’re working on a new album, you can’t keep touring. By the time it comes to promote the album, you’ll have been be so interested to come and see you. You have to let the appetite build up. We’re waiting for the album to come out, chomping at the bit to play this new material live. It’s the first album I think where we can honestly say every single song on it would go down well in a live environment.”

So that’s the plan. Bigger, better, louder, heavier. But how far can they go? Goblin find themselves in a position that a handful of other underground British metal bands have in recent decades. Like Carcass, Napalm Death, Cradle Of Filth or Cathedral before them, they stand on the precipice of greatness, of legendary status, just an arena tour or two away from Great Hall of Brit-metal giants like Sabbath, Priest or Maiden. Will Goblin be the first underground metal band in 20 years to smash that glass ceiling or are they just the next, you know, Heavy Pettin’?

“I don’t really know what it is with that,” shrugs Ben. “There’s been some young bands from the UK that have had massive success in the past few years, like Bullet For A Valentine and Bring Me the Horizon, but I appreciate what you’re saying. It’s like we’re in a generation now where once the old guard retire, who’s gonna headline these festivals? There’s no new Metallica, there’s no new Judas Priest. I’d like to think we can step into those shoes at some point, sure I’d be quite happy to have a go.”There you have it, ladies and gentlemen. Orange Goblin, the new Brit-metal Gods.

The UK has produced some legendary bands that, sadly, never made it out of the underground. Orange Goblin have bucked the trend.

Carcass One band that could stake great claims in being hugely influential across a wide range of metal subgenres including grind, crust, death and even melodeath is Liverpool’s finest: Carcass. And last year’s comeback albumSurgical Steel proved there was plenty of life left in the old beast, though it would be fair to say they’ll always be an underground act.