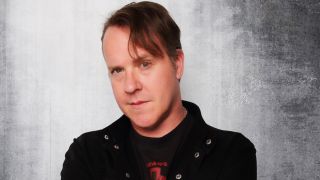 A 20-year-old Burton C. Bell was working in a record store in Washington, D.C., when he heard an artist that would change his world forever. 25 years later, he reflects on the dark genius that is Nick Cave.

“I first heard Nick Cave in 1988 when Tender Prey came out on vinyl. We got an advance copy in the store, but I didn’t know what it was. My buddy who worked there was like, ‘Oh my God, you’re gonna like this!’ I was into Sisters Of Mercy, The Mission and Fields Of The Nephilim. So he put it on and I was hooked! I bought the CD immediately and that’s all I listened to for… it seemed like months. During that time, I thought he must have more stuff, so my friend suggested The Birthday Party, and I was like, ‘Oh my God! Where have I been?’ I was hooked.

“I really get attached to lyrics. When I was listening to his songs, I was like, ‘Wow! This guy has a vision!’ He’s telling a story, but it’s with such a controlled ferocity. There’s sadness in there, a melancholy that’s real. I just felt that everything he was singing about, and the music, just resonated with me with such pure emotion.

“I was excited because there was this back catalogue to explore. I was also an Einstürzende Neubauten fan, so when I heard that Blixa (Bargeld) was in the band… it sounded wicked. I discovered Nick Cave right when I was supposed to, I guess. Tender Prey is probably my favourite album, because it’s the first one I heard and it just stuck that chord with me. I really like most of his records and I’ve collected everything he’s done. That one stands out as the quintessential album. To me, he was on the top his game right there.

“Red Right Hand from [1994 album] Let Love In is a great track; it’s almost like modern blues. It’s over-used, but when I hear it on TV, it’s cool. I remember, quite a few years ago, at Jumbo’s Clown Room (Hollywood strip club), this girl was dancing to Red Right Hand. She did this burlesque routine with a sabre, and I was like, ‘Damn! That’s fucking hot!’

“I once met him briefly, when Fear Factory were on tour in Europe. We were in Norway, playing this festival, and we get to this hotel and there’s bands everywhere. I knew he was playing on another stage, so I’m in my room and I get this call from Christian (Olde Wolbers, former Fear Factory bassist), and he’s like, ‘Dude, Nick Cave’s downstairs! He’s in the lobby!’ I hung up the phone, put my shoes on and went downstairs.

“I’m looking around and I see Nick Cave in this restaurant, holding court. I walk closer and realise I’m standing next to Mick Harvey. His solo record just came out, the one where he covers all those Serge Gainsbourg songs. I loved that, so it was easy to go up to him and say I was a big fan. He was standing next to this tall, lovely woman, and I said I was a huge Nick Cave fan. The lady goes, ‘Hold on’, and she walks over to Nick and whispers in his ear. Then she pulls up a chair for me, right next to Nick! I was like, ‘Hi, I’m Burton, I’m a huge fan. I just wondered if you’d sign my journal for me.’ There was my signature underneath a drawing and he signed it right underneath that. I was only there… maybe not even three minutes, but I got to tell him what an inspiration he was. He was polite and patient and I was so star stuck! And that lovely woman that helped me out… he ended up marrying her!

“The first time I saw him was on The Good Son tour. It was at the Palace – a big place in Hollywood – and there was maybe 500 people there, so I was standing right at the front. I’ve seen him five or six times now, and the last time just brought me to tears. That was on the Push The Sky Away tour in New York, and he’s better than ever. He’s still intense. I mean, he’s older, but he’s still intense, and that’s another reason I’m so enamoured with him; his artistic skills and his entire portfolio is everything I want to do. He continues to work with amazing musicians and does what he wants to do and writes about what he wants. Push The Sky Away is just a timeless classic, and I have every one of his records, live stuff, acoustic stuff, bootlegs… I’ve collected some cool shit. Years ago, I guess as a promo item, Mute released this print of his, a scrawled sketch of him standing naked with devil horns, and I guess they put out 500. I have one!

“I just saw the 20,000 Days On Earth documentary, and it’s amazing. I didn’t think I could be any more inspired by the guy. It’s a day in his life and the director did a good job of capturing the man intimately. Like, he’s sitting there with his therapist, talking about his father, and it’s like, ‘Wow! This is fucking intense!’ There’s a really cool scene where Nick goes to the airport to pick up guests who are gonna be in the documentary. He’s basically talking to them as they’re driving to the hotel. Blixa was there, and it was really uncomfortable because it was the first time they’d spoken since he left the band. But you see them bury the hatchet and their expressions change. It’s a beautiful film.”

Fear Factory will release a new album later this year.