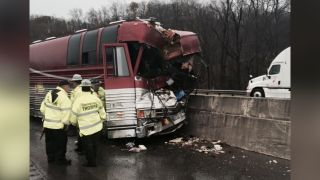 Hinder and The Ghost Inside have been involved in separate tour bus crashes, with all band members having survived.

But The Ghost Inside’s driver was killed when their vehicle collided with a car in El Paso, Texas.

The Ghost Inside say: “All band members and all members of the crew are alive and currently being treated for their injuries. Please keep them in your thoughts as well as their bus driver and those in the other vehicle who did not make it.

“Unfortunately, all US shows on the Locals Only Tour are cancelled. Refunds available at point of purchase. We will update you more when we can.”

The band have set up a GoFundMe campaign to pay for the unnamed driver’s funeral expenses.

Meanwhile, Hinder bassist Mike Rodden and a crewman suffered broken ribs in Cookeville, Tennessee, and their driver has since undergone emergency surgery.

Hinder report: “Special thanks to the Putnam County Emergency Management Agency and the Cookeville Regional Medical Center for taking care of us today. Please send thoughts and prayers to our driver, Dave, as he is in surgery now. Mike and our lighting guy Clint both have broken ribs but will be okay.”

They add that the driver’s dog was also on board and had been feared dead at first, but was later recovered.

While two shows have been cancelled, they expect to resume their US tour in New Jersey on November 21 (Saturday).