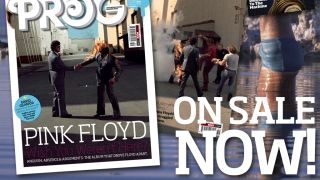 The brand new issue of Prog is on sale today, featuring lPink Floyd’s Wish You Were Here album on the front cover…

On it’s 40th anniversary we look back at the troubled making of Pink Floyd’s Wish You Were Here album, which was the start of the break up of the Gilmour/Waters/Wright/Mason line-up. Nick Mason, album engineer Brian Humphries, backing singer Venetta Fields and more recall troubled studio days, whilst we also take a peak inside the as-yet unpublished Nick Sedgwick book In The Pink which went a long way to developing the rift between David Gilmour and Roger Waters.

**
David Gilmour - talks about new solo album Rattle That Lock, and why he won;t discuss Pink Floyd and it’s David, not Dave. Oh, and we chat with his wife Polly too.

**
TesseracT - with vocalist Dan Tompkins back in the band the band aim for new nights with latest album Polaris.

**
Riverside - its a bold new approach from Mariusz Duda and fellow Polish proggers.

**
Vertigo Records - the inside story of the dukes of swirl!

**
Amorphis - the rugged Finns meld their prog, folk and metal on new album Under The Red Cloud.

**
Mercury Rev - how prog were the upstate New Yorkers?

**
Nicolas Godin - the Air man goes solo with a tribute to Bach.

**
John Petrucci - the Dream Theater guitarist us the subject of The Prog Interview!

And a ten track CD featuring music from The Enid, Grice, The Fierce And The Dead, Aisles, John Hackett, IO Earth and more…