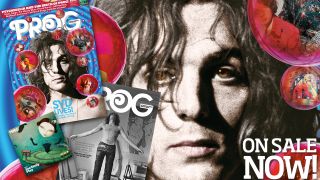 Syd Barrett graces the cover of the new issue of Prog magazine, in gloriously groovy 3D too, as we look at the development of progressive rock from psychedelia through such wide ranging artists as Pink Floyd, Soft machine, the Moody Blues, Procol Harum, Frank Zappa, Captain Beefheart and more. And we investigate the real Syd Barrett, behind the myths, talking to friends and girlfriends who really knew the man behind the myth.

Bent Knee - say hello to the new US progressive sensations!

Blood Ceremony - the US rockers explore the links between rock music and the occult.

Cosmograf - we discuss the latest album from one man band Robin Armstrong!

Jump - 26 years and the UK progress are still going strong.

Be Prog! My Friend - an overview of the Spanish prog festival featuring Magma, Steven Wilson, Opeth and more…

Gail Colson - from Charisma Records to managing Peter Gabriel and Peter Hammill, Gail tells her story as one of prog’s finest managers.

Explosions In The Sky - the Us post rockers can sell out the Royal Albert Hall. But how prog are they?

Hiromi - the Japanese jazz fusion pianist gets a prog rilling.

Tony Pollard - the TV archaeologist lets us nose around his record collection.

And on the CD, new prog sounds from Mystery, Panic Room, The Skys, The Jelly Jam, Security Project and more…

You can subscribe to Prog from the brand new subs page here, or purchase this single issue from here.