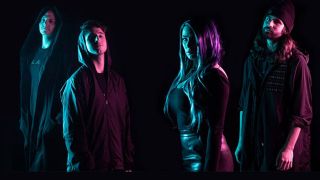 Young Sydney-based prog metallers Introspect have released a video for their first ever single, Ad Astra. It is taken from the band's forthcoming debut EP, Ad Astra, which will releasse on October 18. You can watch the full promo video below.

Lead singer Felicity Jayne tells Prog that Ad Astra is "...a celebration of the ambitious, exploratory, pioneering spirit of youth. It’s a salutation to those that triumphantly strike out into the terrifying unknown, choosing the hard and lonely path of mastery and individuation, rather than treading known career paths and lifestyles. Going all in on your impossible dreams means a life of isolation and sacrifice, with no guarantee that it will pay off. But for some, it was never an option. They must heed the call. To these astronauts, we say: Godspeed, You Heroes!"

Introspect will launch the Ad Astra EP at a live show in Sydney with fellow proggers Glass Ocean and Opus Of A Machine. They will appear at Factory Floor in Sydney on November 30. Tickets are available here.

The single version of Ad Astra can be purchased here.