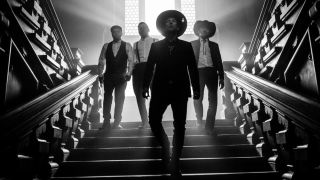 Behemoth frontman Nergal has revealed that he tried to recruit HIM singer Ville Valo for his Me And That Man side-project.

“I reached out to Ville Valo to sing the song Coming Home,” says Nergal. “He liked the song and said he really wanted to do it. He said, ‘I might just stick to the choruses.’ And then he just bailed on me. I lost connection with the guy.”

Nergal adds that he instead enlisted Sivert Høyem, frontman with Norwegian alt-rockers Madrugada, to sing on the song instead.

“He’s one of my all-time favourite singers,” says Nergal. “I happened to be at their show in Berlin. I made it backstage and we started talking. He was happy to help.”

It follows Me And That Man's debut album, 2017’s Songs Of Love And Death, a collaboration with veteran British singer John Porter. Nergal says his relationship with Porter broke down during the subsequent European tour.

“On a personal level, it was impossible to continue,” says Nergal. “I haven’t seen him since. He’s such a weirdo that I don’t know if he’s going to punch me or give me a hug the next time I see him.”

New Man, New Songs, Same Shit, Vol. 1 is out on March 27 via Napalm. You can read a review of the album in the upcoming issue of Metal Hammer, out March 3.