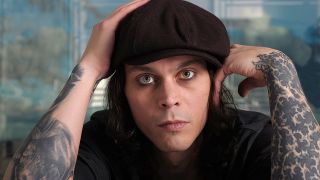 On December 31, 2017, HIM are calling it a day. After 26 years of Heartagrams and heartache, the Finnish love metallers are riding off into the sunset on their own terms, which you can read all about in the latest issue of Metal Hammer. Behind them they leave behind eight albums, each with its own mood, tone and odes to love. Sure, not every album is a solid 10⁄10, and frontman Ville Valo himself knows where the band’s weaknesses lie. Here we talk to the man himself about each of his albums, what it means to him, and why they are all a product of a certain time or place.

We say: A delectable debut perhaps most adored for its cover of Chris Isaak’s Wicked Game, this was a powerful statement of intent, but relative to HIM’s later triumphs it was merely a dark portent of even greater things to come.

Ville says: “Well, this is fun! Okay, wow. For me this album is just a shit-ton of little stories. It’s a diary of how we lost our virginity when it comes to making an album and what it means to record one – getting our feet wet in menstrual blood. Maybe that’s too dramatic…”

We say: More polished and cohesive than their debut, this major-label release featured a game-changing single, Join Me In Death, which was the artistic summation of HIM’s blackened enchantments.

Ville says: “…and this was us learning how to wipe the blood off! Ha ha ha! this was the beginning of our going international; it was dancing on a razor’s edge because we put everything we had into the album and we didn’t know what to expect. It was like playing roulette and hoping for three sixes – and that’s exactly what happened, which is a very rare occurrence. It’s also when the decade of dementia started. Things started happening – fast.”

We say: Not quite a misstep, but this poppier vision left critics cold and fans hungry for tunes that lived up to the promise of HIM’s earliest outings, and served as an important lesson for the burgeoning bandmates.

Ville says: “A lot of times it happens to bands that after the first success, they think they’re great, and that’s what happened for me – I started taking songwriting and HIM for granted. We could have spent more time on it but it’s an important step to take. It’s a hangover after the excitement.”

We say: Charting in 11 countries and in the UK for the very first time, this was the dark essence of Ville’s songwriting heart. Three big singles – Funeral Of Hearts, Buried Alive By Love and The Sacrament – heralded the news: HIM had finally arrived.

Ville says: “Love Metal was when we turned our fingers into Vs and started to get recognition. It was the turning point – it was important because after Deep Shadows… we were trying to figure out what we were and Love Metal was our statement of intent. The Heartagram was our mandala, the representation of everything that we were about. It’s probably my favourite.”

We say: With the UK and Europe won over, the charm-offensive on America began, as did the first public signs of Ville’s surrender to the trappings of fame. A solid follow-up to their magnum opus, this was HIM’s creative peak.

Ville says: “That’s a confusing one. We went to the States for the first time. I’m not sure how much of a success it was here in the UK but it got us into magazines over there for the first time. It was doing the same thing again with a different set of ingredients. I don’t remember much – I was drinking a lot. You think you’re superhuman and it’s like there’s nothing to reflect upon, you just don’t see the forest for the trees. Great album, though.”

We say: A bitter pill that offset the sweetness of previous outings, this was HIM at their heaviest, and Ville at his darkest. Gone was the sardonic regard for the world, and present was a joyless outlook that reflected the grimness of his life and times.

Ville says: “It was our hats off to British doom metal: My Dying Bride, Paradise lost, Cathedral. It was prophetic as it was getting doomy for me, too, which translated well, but it’s tough to say which came first. I dunno, my brain came first. I really like the album, but I wasn’t well. There was the hedonism of Dark Light, the American rock moment – this was the European answer.”

Screamworks: Love In Theory And Practice (2010)

We say: Screamworks was Ville’s recovery album. This was a fast-tempo rocker that was heavy on ditties but light on the lightless vision that first won HIM so many fans in the first place.

Ville says: “That was the antithesis of Venus Doom, which makes it logical. With HIM, the fun thing is if you like the hard-rocking HIM albums, skip every other one – it’s pop then gloom then pop… this was a lot of fast tempos and energy and I wanted it to be different from Venus Doom. Maybe I wanted to be a third-rate David Coverdale.”

We say: An upbeat return to form that affirmed Valo’s songwriting prowess, HIM’s studio swansong was a nod to the past, and a sturdy final bow.

Ville says: “For me, Tears On Tape was like Love Metal part two – it sounds a bit more organic, a bit more Sabbathy in its sound and vibe. But for some reason it just didn’t resonate, it didn’t come out at the right time – some countries liked it, some hated it, and maybe it was just a sign of what was to come. The title track I really love, though; it’s very HIM in that it’s fun and serious at the same time, which was always our speciality.”

You can read the world-exclusive final interview with HIM’s Ville Valo in the latest issue of Metal Hammer – on sale now. Buy it directly here or become a TeamRock+ member to read it right now.

HIM is dead: Ville Valo's final interview ever