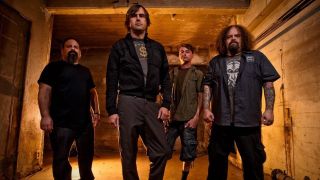 Napalm Death have issued a video for their track How The Years Condemn.

Bassist Shane Embury says the self-reflective lyrics were inspired by a stay in hospital several years ago, when he was forced to confront his mortality.

He says: “I thought about how lucky I was to be doing what I had always dreamed of doing, and in doing so, the awesome people, friends and loved ones that I had met and who now accompany me on this strange journey called life.

“To my loved ones I realised I had been selfish and it was time for a change, a realisation that we are not invincible nor are we indestructible.”

Napalm Death head out on the road later this week and will play alongside Voivod, Carcass, Obituary and Herod on the Deathcrusher tour in October.