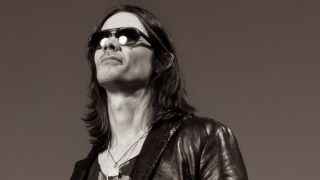 Did you have a particularly religious upbringing?

My biological father and mum were Christian Scientists, and that’s part of the reason my father passed away – they don’t believe in medicine essentially, they believe that God will heal you. And so he ended up passing away from something that could have been fixed. And then a few years later my mum married a Methodist minister, and he’s great – he’s been wonderful. It was a religious household but it wasn’t real hardcore – it was very liberal and he taught me to kind of try and seek out my own answers in life. He never tried to shove anything down my throat, which I really appreciate, especially looking back.

What stands out in your memory of being brought up in a Christian Scientist household?

Well, y’know, what stands out, there was this thing called a ‘practitioner’. If you got sick, you called the practitioner on the phone, and I guess they just kind of talked you through things. There was this term called ‘error’, which I think was like ‘evil’, but those are the only things I really remember from that time. It was just very different from what I embrace now in life, that’s for sure. So when I think about that sort of thing, it’s very intriguing – ’cos it was such a big part of my life initially, but it seems so foreign to me now.

Do you believe in God today?

I’m on the fence – I guess you’d refer to me as an agnostic. I don’t know if there’s a God. It would be great if there was one, but I just don’t know. I haven’t seen proof.

So what kind of beliefs do you subscribe to?

I think my belief system is just to ultimately try and do the right thing, and let people do what they want to do, and believe what they want to believe. I just continue to learn and grow. I guess I don’t know if there’s a God or higher power, but I’m trying not to completely shut that out. I look at it like an atheist who seems to believe there’s absolutely nothing, which for me takes as much faith as believing there is a God. We just don’t know.

Did the death of your father make you angry with organised religion?

Oh absolutely, without a doubt, and I still do get frustrated. I’ve never really gotten over the fact that my father passed away because of religion, so there are times when I get upset when I think about that. And I’ve heard stories about children who’ve passed away in the Christian Scientist community because their parents didn’t take them to the doctor. That really outrages me – it’s one thing if you’re an adult and you make that decision for yourself, but if you’re a parent and you don’t take your child to the doctor in the name of religion, that’s just not fair. That gets under my skin.

Your current bandmates’ old group, Creed, were seen as a ‘religious band’. Is that term a good thing or a bad thing?

To some people it’s a derogatory term, being called a ‘Christian rock band’. For me, what’s the difference between a Christian rock band and one that embraces Satan? And at the end of the day, whether it’s good or bad, good or evil or whatever, you’re integrating myth into your music. So if that’s what you wanna do, that’s cool.

What’s the biggest challenge of being human?

The fact that we have a finite amount of time to live, and the strange thing is we don’t know when that’s going to end. We have no idea of whether tomorrow’s going to be your last day, or sixty years from now, and that adds a certain… frustration. [Laughs] I always wonder about that when I look at my dog – does my dog have any idea that he has a limited amount of time on the planet? God, to live as a dog for a week… that would be wonderful.