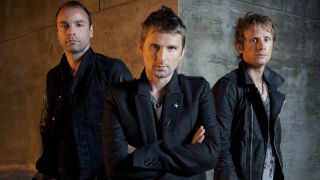 Muse frontman Matt Bellamy has called producer Robert John ‘Mutt’ Lange a “guru” – but admits he had reservations about working together on the band’s seventh album Drones.

Lange – known for his collaborations with Def Leppard, Nickelback and many others – was behind the desk for the follow-up to 2012’s The 2nd Law, due on June 8.

Bellamy tells Rolling Stone: “Before I met him I wasn’t sure. I didn’t want us to be turned into a kind of top 40 act. I figured Mutt would be more focused on, ‘What’s the single? What’s going to be the big hit?’”

But he continues: “He wasn’t like that at all – he was totally into the concept. He’s the kind of person to get into the mind of the artist and whatever the artist wants.”

The frontman describes Lange as “very eccentric” and adds: “He has the air of a person who hasn’t lived in the constraints of normal society or life for a very long time. You feel like you’re in the presence of some sort of guru, or spiritual outsider.”

Bellamy recently explained the album was inspired by the potential horrors of drone warfare. Muse released a video for their track Dead Inside in March. They headline this year’s Download festival at Donington in June.