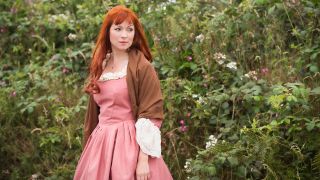 Ms Amy Birks premieres her video for debut solo single Jamaica Inn with Prog. The winner of Best Female Vocalist in the 2018 Prog Magazine Readers' Poll, as well as a Prog Award winner with Beatrix Players will release Jamaica Inn as a limited edition 12" single through The Merch Desk, as well as a digital download and via streaming services on November 15.

The song features John Hackett on flute, guitarist Oliver Day (Fragile, That Joe Payne) and cellist Caroline Lavelle, who has worked with Massive Attack and Vangelis.

"Being a huge fan of the South West of England, Daphne Du Maurier and period dramas, I thought, why not do something really authentic for Jamaica Inn and head down to Bodmin to really capture the essence of the song; romance and turmoil of a time gone by," Birks tells Prog. "Any excuse to wear a period frock and jump on a horse, not to mention riding in a beautiful carriage whilst sipping on a local draft… What more could I wish for? I had so much fun shooting the video, even if the sea was pretty fresh and the locals were a little bemused by all my flapping around on the beach… So I hope it was worth it."

Birks has been busy recording her debut solo album, which will be released on. Valentine's Day in 2020 (February 14 for the non-romantic among you).