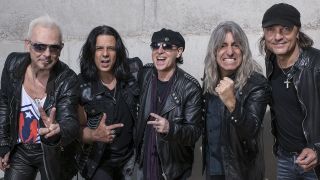 Dee, second right, with the Scorpions

Scorpions singer Klaus Meine has hailed former Motorhead drummer Mikkey Dee as a “fresh wave of energy” for the band.

Dee was named a permanent member of the veteran German outfit last month, after having joined them on a temporary basis in April. The move came after the end of Motorhead with mainman Lemmy’s death in December.

Meine says in a press conference video, below: “We celebrate 50 years of Scorpions, but it’s much more than that – the fact that the band is still together and we still put on a damn good show.

“And with Mikkey just joining the band, there’s a fresh wave of energy. It’s a lot of fun and we enjoy it every night.”

He adds: “You have great musicians – a great drummer, a great guitarist. And the guy can be the best musician in the world, but it’s very important to have a good company.

“This was the foundation for the Scorpions – to have not only great, talented musicians, but also good friends.”

Dee says his experience so far has been very positive, and continues: “This whole year has been flying by, really.

“It’s always hard to join a band that’s already so established, and also for them to get used to me, of course. But it seems to work really well. We’re rocking the house.”

The Scorpions complete their 2016 touring schedule in Germany in December. Motorhead guitarist Phil Campbell has formed his own band, the Bastard Sons, who release their self-titled debut EP on November 18.

Lemmy is laughing, and he’s proud of us, says Motorhead’s Mikkey Dee