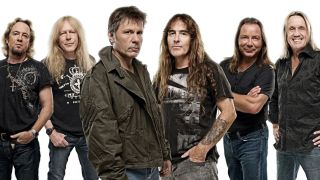 Iron Maiden bassist Steve Harris says they’ll never make other bands pay to support them on tour – and he believes other successful acts should do the same.

He argues that it’s a great opportunity to help nurture the big names of the future, and it’s also a chance to give something back to the scene that made him a success.

In many situations, support bands will be required to “buy on” to a headline act’s tour, paying for the opportunity to appear before a bigger audience than they’d get themselves, with the aim of expanding their own following.

Harris tells Metal Journal (via Blabbermouth): “I hate it when people charge bands to play with them – I hate that. I’ve never done that and I will never do it.

“To me, it’s just wrong. A band should get at least some expenses to pay a gig, and they should’t have to pay to play. I’ve always been really against that. I’ve always tried to help people out.”

Asked why the NWOBHM giants continue to advocate rising-star musicians, he replies: “Well, because we can.

“Anybody who’s in a position Maiden is, any band that can potentially take another band on tour, you can help people. It doesn’t take much effort to do that.”

Harris believes it’s one way to repay the music scene for his “fantastic life and career,” adding: “I’ve worked very hard, but maybe I’ve had a bit of luck along the way. At the end of the day it’s nice to give something back.”

And his attitude extends to the members of his solo band British Lion, who commence a European tour next month. “They’re all talented guys,” he says. “They deserve some sort of recognition, and up till now they haven’t had that. They’re getting a little bit of recognition now, and quite rightly so. I love that.”

He enjoys watching the reaction of his colleagues when they visit a city they’ve never seen before, even though he may have played there himself many times previously.

“I see it in their eyes, how excited about it they are – it makes me fee good as well,” he reports. “It’s the same with other bands. If you help them, and they’re experiencing things for the first time, it’s nice to see.”

Iron Maiden will tour Europe and the UK in April and May next year.

Readers poll result: Iron Maiden for the Rock And Roll Hall Of Fame