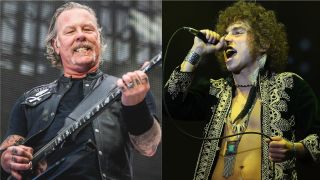 The shows will kick off in Chile at Santiago’s Estadio Nacional on April 15 and wrap up in Brazil at Belo Horizonte’s Estadio Do Mineirao on the 27th of the month.

Metallica say: “As the WorldWired tour hits the last leg in Europe, there are still so many places left to visit… South America, you’re up first in 2020!

“The last time we had the pleasure was in 2017 as part of the Lollapalooza festival and now it’s time to come back with the full-on stadium experience for six headlining shows including two Brazilian cities we have never played in – Belo Horizonte and Curitiba.

A fan club pre-sale will get under way on August 19 from  10am local time, while general sales for all four Brazilian concerts will be available from 10am on August 22.

Tickets for the show in Santiago will be available from 11am on August 22, while those looking to go to Buenos Aires can get their hands on tickets from 10am on August 27.

Greta Van Fleet, who released their debut album Anthem Of The Peaceful Army in October last year, say: “Extremely please to announce that we will jin Metallica next April for a momentous return to South America.”