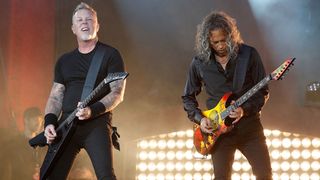 Metallica have announced that they’ll release their new single Atlas, Rise! on Halloween.

It’ll be the third track lifted from their upcoming 10th studio album Hardwired… To Self-Destruct – which will launch on November 18 on 2CDs along with a deluxe edition featuring a third disc. Metallica previously released Hardwired and Moth Into Flame from the follow-up to 2008’s Death Magnetic.

The band say in a statement: “No surprises this time around! We’re giving you some heads up that we plan to unleash the next track from Hardwired…To Self-Destruct, Atlas, Rise! to you streaming online and via your favourite radio station this Halloween, October 31, at noon PDT.”

In addition, Metallica are giving fans the chance to get their hands on a limited edition Hardwired…To Self-Destruct Halloween mask from Friday, October 28, at select independent record stores.

The band add: “Inside of each mask you’ll find a special access code that will allow you to hear Atlas, Rise! 30 minutes prior to its official release on Halloween.”

A full list of participating stores can be found here.

The band continue: “We’re less than a month away now. Looking forward to celebrating Halloween with you as we take the next step toward the release of all 12 songs.”

Metallica continue their run of live dates on October 26 at the San Juan Coliseo, Puerto Rico.