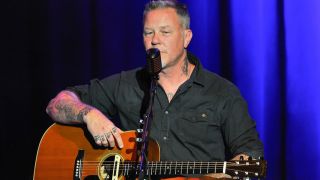 James Hetfield in action at the weekend (Image credit: Getty)

Metallica frontman James Hetfield has been caught on video playing an acoustic version of his band’s track Motorbreath.

His performance took place in San Francisco over the weekend at his annual charity event Acoustic-4-A-Cure, co-founded with Sammy Hagar, which is held to raise funds for child cancer research.

Metallica reported: “James performed a three-song set including Motorbreath, The Unforgiven and a cover of Screamin’ Jay Hawkins’ I Put A Spell On You. During his set he was joined by Tommy Lee, Joe Satriani and his daughter Cali.”

The full-power original version of Motorbreath appeared on Metallica’s 1983 debut album Kill ‘Em All. The band continue work on their 10th release, which is expected at some point this year. They’re featured in the current edition of Metal Hammer, on sale now in print, digital and via TeamRock+.