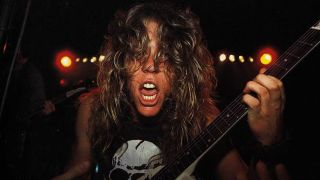 With brand new interviews from the band, the manager and the producer behind Metallica’s masterpiece Kill ‘Em All, we discover, track by track, how they made heavy metal history.

GET YOUR COPY OF THE MAGAZINE HERE

Featuring brand new interviews with Lars Ulrich and Kirk Hammett, we reveal the stories behind every song on the world-beating debut album Kill ‘Em All. How did four kids fuelled on cheap beer and greasy food manage to redefine metal? With Dave Mustaine’s songs about sex and Cliff Burton getting high before nailing (Anesthesia) – Pulling Teeth in one take, this is the real inside story of the first Metallica masterpiece.

Trivium recently trekked up and down the United Kingdom playing intimate venues in cities and towns they’ve never visited before. We get the complete lowdown on the experience from Matt Heafy and Paolo Gregoletto, day by day, photo by photo, meal by meal. What goes on backstage when Trivum are in town? We go access all areas – from martial arts to macaroons!

Away from The Dillinger Escape Plan, frantic string-slayer Ben Weinman is hoping to transform the music underground with his new creative venture Party Smasher Inc. Designed to bring the community spirit back to music, Party Smasher is a collective of artists, designers, musicians and innovators with an original and alternative vision. But where did this idea come from, and will it work? We find out!

Following the sexual assault of a fan at a Baroness gig at Birmingham Institute, we talk to people with similar experiences and meet the people working hard to stop this disgraceful behaviour, and find out what to do if it happens to you.

With a love of psychedelic drugs and and ‘60s music, we meet the colourful, kaleidoscopic rock star Rosalie Cunningham from Purson to find out why The Beatles are such a strong influence on her music and why she tried cooking DMT in her kitchen.

As the independent punk and metal label Holy Roar Records celebrates its tenth birthday, we catch up with founder Alex Fitzpatrick to talk about pushing the boundaries of heavy music, why those in power need a shake up and why he’ll continue to fight for underground music.

All this plus more big-ass features from Black Peaks, Hatebreed, Fallujah, Delain, Schammasch, Architects and more!

And FREE gore-filled comic Realm Of The Damned from Alec Worley – ideal for fans of blood splatters, graphic violence, and a little bit of rock ‘n’ roll thrown in.

But that’s not all, we’ve got a FREE CD packed with killer music from Killswitch Engage, Steel Panther, Grand Magus, Jonestown, Vektor and more! And we’ve got TWO MASSIVE POSTERS from Baroness and Parkway Drive!

Read Metal Hammer the way you want. Instantly read the articles from issue 283 of Metal Hammer and dive into the back issues right now on TeamRock+. Experience the interactive digital edition for your iPhone and iPad or Android device.

Or pick up a REAL PHYSICAL COPY HERE!