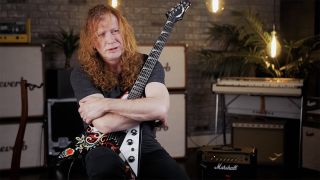 Megadeth’s Dave Mustaine has teamed up with Reverb to sell almost 150 pieces of equipment, including acoustic guitars, electric guitars, amps, an autographed drum machine and more.

The vocalist and guitarist says that some of the items go back to the very beginning of the band and he’s decided to sell them as he wants to give something back to the fans.

Mustaine says: “When you’ve been playing and touring for as long as I have, you tend to amass quite a collection of gear. They’re great instruments and they represent more than 40 years of playing, but I’ve got more than I could possibly use myself.

“I owe so much to my fans. If it wasn’t for them, I wouldn’t even have all this gear. I’d rather give it back to them than let it sit and collect dust.”

The sale will begin on November 4 and among the items up for grabs are a 1987 Dean Dave Mustaine Signature Holy Grail V, a Signature Zero Korina, a 2007 Signature Silver V prototype and a Signature Stealth VMNT that Mustaine has used extensively on the road.

Check out some of the guitars below along with a video interview.

Mustaine has been undergoing surgery for throat cancer and checked in back in September to say he was about to complete his last round of medical treatment.

He was forced to take a step back from Megadeth’s recent Megacruise, but he’ll be back on the road with Megadeth when they tour with Five Finger Death Punch across Europe in early 2020.