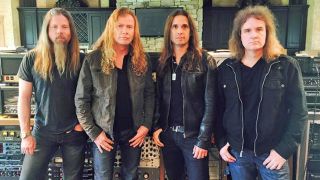 “That’s what I did. Isn’t that crazy? It’s out of my world. I’m a traditional country guy, but the stuff I played on is awesome.”

The follow-up to 2013’s Super Collider is expected later this year. Mustaine was this month named Metal Hammer’s Golden God of 2015.

The band have two upcoming live dates scheduled at the Festival d’ete de Quebec, Quebec City, Canada on July 18, and at Loud Park 15 in Tokyo, Japan on October 11.

Megadeth feature in the latest edition of Metal Hammer magazine – out now in print, digital and via TeamRock+.