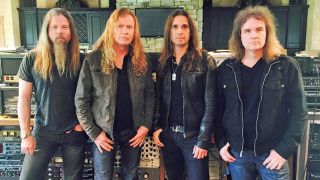 Megadeth have released the first picture of their new lineup.

The band are at work on what will be their 15th album, and Mustaine said recently they have already written 15 tracks for the record. The picture of the new lineup was posted on Megadeth’s Facebook page, along with the caption: “The first photo of everyone together.”

Former Megadeth drummer Nick Menza recently claimed he had been offered the chance to return to the band along with guitarist Marty Friedman in a move that would have reunited the Rust In Peace era lineup. But Menza says he turned down their “unfair” contract.

And this week another guitarist, Rusty Cooley, revealed he had also turned down a job offer with the band.