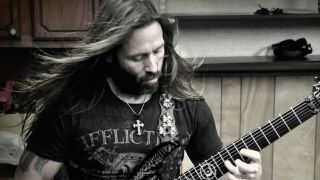 Guitarist Rusty Cooley says he was approached with an offer to join Megadeth but turned them down as he didn’t want to play “everybody else’s solos.”

The Texan musician and guitar tutor claims he was approached in January to replace Chris Broderick who quit the thrash giants with drummer Shawn Drover last November and while he thought it would be a good move at first, he soon had a change of heart.

He tells The Sick Room podcast: “Initially I was like, ‘Oh shit, I need to do this’ just because it’s Megadeth and it would be great for my career. I was going to do it but the more I thought about it, I started second guessing myself.

“I felt like I was doing it because everybody else wanted me to do it and I’ve never done that. I’ve always made decisions based on what I want to do.”

He continues: “I struggled with it for a little while because it’s a huge offer. But I’d be going into this band playing 20 years of someone else’s material and the only thing I would maybe get to contribute would be solos on a new record.

“So I’m just going to be playing everybody else’s guitar solos. That just doesn’t appeal to me and no amount of money can make that better.”

He says when he turned down the offer, mainman Dave Mustaine was “super-freaking cool” with Cooley’s decision and adds: “I have nothing but good things to say about Dave. When I talked to him, he was nothing but a gentleman and very kind. I have nothing but thanks for him to consider me for the gig.

“It was cool to know that I was pretty much the first guy he called. And now they’ve got Kiko Loureiro, and that’s cool.”

Along with Loureiro, Mustaine hired Lamb Of God sticksman Chris Adler for their upcoming 15th album, while they’ve also launched a PledgeMusic campaign to give fans who pre-order exclusive bonus content.