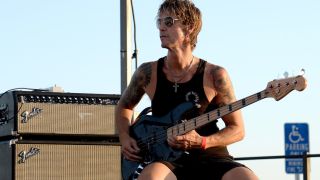 Duff McKagan says his attitude to recording with Guns N’ Roses in the future is “never say never.”

The bassist rejoined ex-colleague Axl Rose for a run of shows in South America earlier this year, after having made a handful of guest appearances with the current lineup of GnR since a London reunion in 2010.

Now McKagan tells Blairing Out: “It was great going and playing those shows – we had a good time.”

Asked about recording he says: “I never say never to anything these days. I’ve learned. You never know what’s around the corner. And all that aside, I’m just glad he and I were able to get together and talk about some stuff, then laugh about a lot of other shit that happened.”

McKagan recently completed a second album with his latest project Walking Papers, and hasn’t given up on going back to work with Velvet Revolver – if they can find a replacement for fired frontman Scott Weiland.

McKagan says: “I don’t think we’re done. We played with some guys only two weeks ago, all really talented. We’ll know when he walks in the room, I think.”

Guitarist Slash this month told how VR had decided against working with Slipknot and Stone Sour frontman Corey Taylor because they thought he was “too macho” for the role. In May former Rose manager Craig Duswalt predicted the original GnR lineup would get back together by 2016.