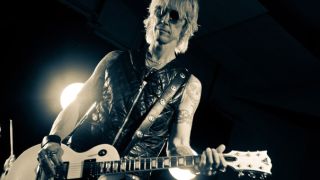 Guns n'Roses have confirmed that classic era bassist Duff McKagan will return to his old job for five shows starting this weekend.

He’d sparked speculation after tweeting a picture of a setlist and saying: “Argentina, Paraguay, Bolivia, Brazil! See y’all in the next few weeks, Si? GNR.”

McKagan joined GnR for rehearsals last month in Los Angeles. He says: “It’s pretty great to play these songs again, and I’m looking forward to playing some gigs with my pal again. South America is always a radical place for rock n roll. I’m honoured to be doing this thing in that place.”

Stinson tells Billboard: “I didn’t want to fuck anyone up in Guns by saying, ‘Hey, I can’t do this tour.’ Luckily someone was able to reach out to Duff and he was amenable to the idea.

“It’s Duff being the kind of good sport he is, trying to help Axl out. I think people are gonna be really stoked about it.

“The only bummer is I don’t get to see one of the shows he plays, especially after playing his fucking parts for 17 years. It would be interesting to see how he plays them – there’s a couple things I could use some pointers on.”

McKagan split with GnR in 1997, leaving frontman Rose as the only member of the classic lineup. He made a guest appearance with the current band in London in 2011 following a chance meeting with his former bandmate in a hotel.