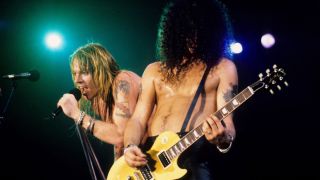 And that’s despite a moment five years ago when guitarist Slash tried to meet the singer, but wasn’t allowed in.

The topic of the former colleagues settling their differences regularly arises, with both having said they’re content to live their lives without the involvement of the other. But Craig Duswalt, who looked after the singer’s affairs during GnR’s Use Your Illusion era, believes Duff McKagan’s recent stints with the current GnR allows the bassist to act as an ambassador.

Duswalt tells ABC: “Duff is paving the way to open the gates again. Axl and Duff are really getting along well at the concerts, so there’s an opening.

“About five years ago Slash went to Axl’s house one day – and Axl didn’t want to see him. We thought for a while, ‘Yes!’ but then it just got ugly again and we thought, ‘There’s no way.’”

The exec says he knows of “a specific thing” that caused the collapse of the pair’s relationship, although he won’t discuss it. But he adds: “There were also differences in music; Slash wanted to do more hard rock stuff and Axl wanted to do more ballads.”

Duswalt accepts things aren’t good between the ex-bandmates. “I know for a fact they hate each other right now – it’s bad,” he admits. “Axl is a loyal guy; you get on his bad side and people don’t come back. But Slash hand he were so close. We all have a feeling it will happen.

“And it’s going to happen in the next two years – there’s an opening because of Duff playing with Axl.”

Rose this week said there was a strong chance McKagan could play with GnR more often after he stood in for Tommy Stinson on a recent tour of South America, and appeared again in Las Vegas over the weekend.

Slash’s third solo album World On Fire will be launched as a Classic Rock Fanpack a month before it hits shelves as a regular release.