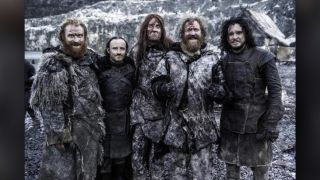 Mastodon have spoken exclusively to the Metal Hammer Magazine Show about their appearance as wildlings on the latest episode of Game Of Thrones.

They previously revealed they were big fans of the HBO show, and recorded the track White Walker for Game Of Thrones compilation Catch The Throne: The Mixtape Vol. 2.

The band met some of the cast and one of the writers at last year’s Sonisphere – and that led to the opportunity to appear in the latest episode which was filmed in Belfast last November.

Kelliher tells Alexander Milas: “It just so happened that we were starting a tour and they were shooting a scene in Belfast the day before. So the stars aligned and we were able to fly in a day early, quickly get there and jump into a scene.

“There was a lot of playing dead which contrary to popular belief is not that easy to do. I actually fell asleep, laying down on the ground with my battle axe by the water because I was so jet-lagged.”

Kelliher says they didn’t get to take any props home but adds: “I did get to sit on the throne and take some photos. That was really amazing. We saw Castle Black from afar.”

He reveals many of the extras were fans of the band and once word got out that they were on set, they were swarmed by well-wishers. “All the extras on the show look like our crowd, our target audience – big hairy dudes with giant beards and tattoos,” he recalls. “Every single one of them came over and said, ‘Hey, how are you doing? We love your band.’ It was amazing.”

When asked if he would like to reappear on the show, Kelliher adds: “I did come back to life so I’m still alive in the show and my character hasn’t been killed off yet. So I expect to come back and sit in that throne again.”

The full interview will air on the Metal Hammer Magazine Show via TeamRock Radio on Monday (June 1) between 8-10pm.

Mastodon play the Reading and Leeds festivals on August 29 and 30, as part of a wider European tour.