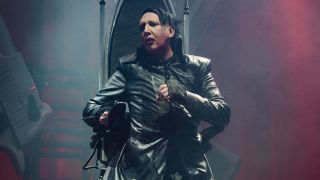 Marilyn Manson has been accused of harassment by actor Charlyne Yi.

She made the claim following Manson’s shambolic set at the Paramount in Huntington last Thursday night, where the shock rocker reportedly cut his set short and walked off stage.

After video of part of the performance appeared online, Yi said (via The Hollywood Reporter) that she hopes Manson “gets help” but added: “Don’t even get me started on Marilyn Manson.

“Yes this happened a long time ago – on the last season of House he came on set to visit because he was a huge fan of the show and he harassed just about every woman, asking us if we were going to scissor, rhino and called me a China man.

“It’s so triggering to see people come up on the internet who have harassed you. And then when you talk about the incidents, you become known as the person tied to the harasser. And that’s just your name from now on. It almost overrides who you are.”

As for Manson’s show, the Paramount posted a short video to promote the concert, which prompted fans to leave comments expressing their disappointment and anger at the performance.

One fan said: “Six songs in an hour and a half, one song was about 30 minutes – mainly with his back to the crowd and no singing.

“He went on rants that lasted over 10 minutes, begging the crowd to tell him we love him and then speaking jibberish. He ripped us all off.”

The next leg of Manson’s Heaven Upside Down tour will kick off in May.