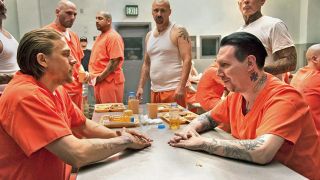 Marilyn Manson says he went out of his way to avoid reading spoilers during his stint on hit TV show Sons Of Anarchy.

The singer played white supremacist Ron Tully in the final season of the show. But he made sure to only read his own character’s lines from the script to avoid ruining the excitement for himself.

He also recalls the pride he felt when he told his father he had landed the role.

Manson tells KROQ: “I knew what was going to happen. So I would only try to read my part. I thought the show is so much about that father-son relationship and I just wanted to do something to make my dad happy.

Manson releases his new album Pale Emperor on January 19. This week he made the track Deep Six available for streaming.