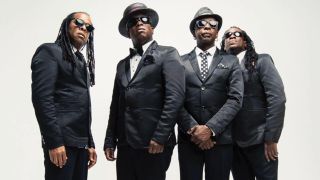 Living Colour have released a new video for their 1990 track This Is The Life.

The song originally featured on the band’s second album Time’s Up, with the new video featuring footage of the ongoing protests sparked by the death of George Floyd in Minnesota and is interspersed with live shots of the band.

Living Colour say: “Time’s Up was released 30 years ago and sadly we're still fighting the same fight. If you don't like the current agenda, it's your responsibility to go out an vote!”

Floyd died on May 25 after police officer Derek Chauvin knelt on his neck for eight minutes and 46 seconds, despite Floyd pleading that he couldn’t breathe. He was then taken to hospital and pronounced dead an hour later.

Reacting to the video which was broadcast around the world, Living Colour guitarist Vernon Reid said previously: "Of all the shocking mobile phone recorded extra judicial police killings, the murder of George Floyd is the most depraved exercise in contemptuous disregard for human life I’ve ever seen.

"Next time you see it – if you can stomach it – pay attention to the hand in pocket posture.”

Chauvin and the other three officers who were present were fired from the Minneapolis Police Department.

On June 17, Bandcamp will donate 100% of their share of sales to the NAACP Legal Defence Fund to help in the fight for “racial justice, equality and change.”