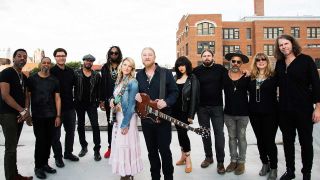 Tedeschi Trucks Band have released They Don’t Shine, the second song to emerge from their upcoming Signs album. Released on February 15, Signs is the follow-up to 2016's Let Me Go By.

They Don't Shine is a solid chunk of Stonsey, feel-good rockin' blues. “It's pretty much a straight-ahead rock‘n’roll song," confirms guitarist Derek Trucks. "No frills, short and sweet... which is a little uncharacteristic for us. But it shows another facet of the band. Some mean guitar-soloing from Susan! “Shine, shine, shine!”

Available to pre-order now from Snakefarm Records/Fantasy Records, Signs was written by all 12 members of the band, and recorded in Tedeschi and Trucks' backyard studio, Swamp Raga, in Jacksonville, Florida. Also starring on the album are Warren Haynes, Oliver Wood and Doyle Bramhall II.

The album was written and recorded following a series of tragic losses for the band, including the death of Derek’s uncle and Allman Brothers member Butch Trucks, mentors Leon Russell and Col. Bruce Hampton, and Gregg Allman.

Trucks says: “This is the first record we’ve made where, when I listen to it, it puts me in a specific place. It puts me in a zone and hits some raw nerves.”

Tedeschi adds: “We are very lucky to do what we do, and we take responsibility for creating something positive to counter all the negativity.

“We all have to deal with tragic circumstances at times. As a musician, I feel it’s my job to go out there, kick ass the best I can and offer inspiration.”

The band are currently on tour in the US, before heading to Europe in April. The tour includes two nights at the iconic London's Palladium (both dates are sold out). Tickets for all other shows are on sale now.