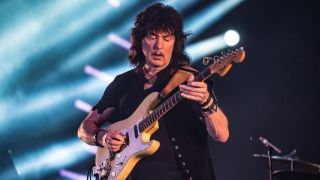 Ritchie Blackmore’s Rainbow have released their first new studio material in 22 years. The two songs are a re-working of the band’s 1981 hit I Surrender — originally sung by Joe Lynn Turner, now voiced by new singer Ronnie Romero — and a cover of Edward Elgar’s famous Land Of Hope And Glory, a patriotic song written in 1902, and perhaps best known for its use at the close of The BBC’s annual Last Night At The Proms broadcast.

In April, Blackmore told Japan’s Burn Magazine, “We recorded some songs for Blackmore’s Night and two songs with the new singer for Rainbow. I wrote one new song, and also recorded one of the old ones. Ronnie, who is in Madrid now, added his vocals and sent it back. Rather than make an album, we may release as singles.”

Rainbow’s performance at the Genting Arena in Birmingham from June last year is to be released as a double album on June 9 titled Live In Birmingham 2016.

Tickets and VIP packages are on sale now.