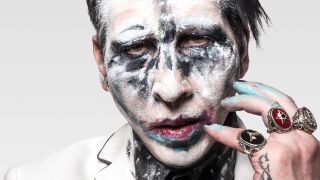 Marilyn Manson has made his new song KILL4ME available to stream on Spotify.

The release of KILL4ME follows on from We Know Where You Fucking Live, which was released last week with an official video following days later.

“Some might say ‘Would you kill for me?’ is a question. It’s more of a veiled threat than a question. It’s an ultimatum, I think,” said Manson in an interview with Loudwire. “I don’t like songs to generally ask questions because it seems not as certain as I feel that I am. I like to tell people this is how I feel, and I might want them to ask questions from it, but I’m not gonna ask the question. It’s like a letter, like someone’s gonna respond to it.”

KILL4ME is taken from Manson’s upcoming tenth album Heaven Upside Down, due for release October 6.

Heaven Upside Down is available to pre-order now.