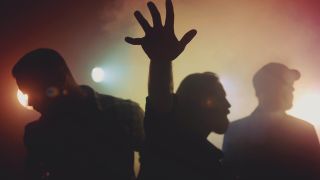 Dream The Electric Sleep have made their 'lost' album The Giants' Newground available to stream in full exclusively with Prog.

The album will officially launch on Friday (May 18) but Prog readers can listen to all 16 tracks below.

Page says: “The Giants’ Newground is a bookend for us. In many ways the album, which preceded the formation of Dream The Electric Sleep, represents a certain way of approaching our musical paradigm.

“It highlights the seeds that led to the band’s first three albums. In it you can hear certain lyrical and compositional preferences that evolved all the way through our last album Beneath The Dark Wide Sky.

“We were able to take all that we learned from our first three releases and re-apply them to the revisited version of The Giants’ Newground. In this way, I see these four albums as linked, an evolution of that first paradigm."

Page adds: “Since the band has also been writing our next album to be released in 2019, we can see a clear difference in our creative intent. It marks a different phase for the band, maybe a new writing paradigm?

"Now, with the release this lost album, the first four albums can be heard as a series of attempts to chase and capture something similar, but now it is time to close that book and begin a new one.”

Further details about the band’s next release will be revealed in due course.