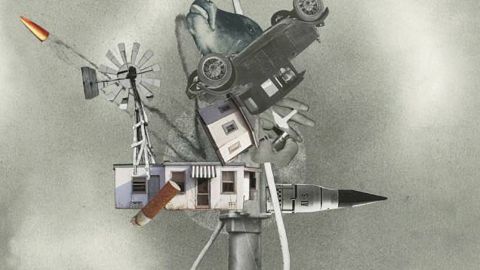 The follow-up to 2014’s Heretics has all the huge melodies and arena-filling crescendos of its predecessor, only now there is a socio-political imperative: Beneath… was inspired by photographs taken of the Dust Bowl in the 1930s by American photographer Dorothea Lange, who according to singer-guitarist Matt Page, “believed photographs had the ability to shine an objective light on issues of social justice and environmental degradation and could be used to motivate social and political change”.

The songs here sound as though Page has something important to impart: he’s on a proselytising mission. Recorded at Rock Falcon Studio outside of Nashville with Nick Raskulinecz, a Grammy-winning producer who has worked with Foo Fighters and Rush, the music has a declamatory urgency to match the muscular choruses.

Let The Light Flood In features U2-circa-1984 bombastics while We Who Blackout The Sun suggests the tar-black lustre of Soundgarden’s Superunknown, if not in just the title. Beneath… is certainly accomplished and you can imagine DTES accruing a loyal following on the live circuit if they haven’t already with this monumental, melodic pummel.