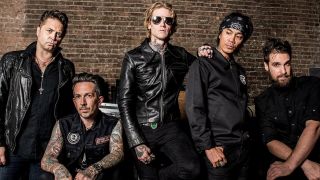 Buckcherry have released a video for their cover of Nine Inch Nails classic Head Like A Hole.

The song originally appeared on Trent Reznor and co’s landmark 1989 debut Pretty Hate Machine, with the Buckcherry version set to appear on their upcoming album Warpaint.

Speaking about the follow-up to 2015’s Rock ’N’ Roll, Buckcherry vocalist Josh Todd says: "Good things come to those who wait and we have been very patient and thorough with the song writing for Warpaint.

“We took into consideration all the factors and what this record means to, not only us, but the great Buckcherry fans around the world.

"This record takes the listener on an unforgettable journey and I’m very proud of it.”

Buckcherry will head out on the road in support of the album with four dates in California in January, before they head to the UK and Europe throughout February.