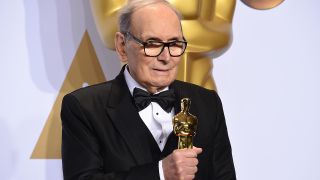 Oscar-winning Italian composer Ennio Morricone has died at the age of 91.

The news was reported by his longtime friend and lawyer Giorgio Assumma, who said that Morricone died in hospital in Rome where he was recently admitted after breaking his leg in a fall.

Morricone wrote the scores for more than 500 films and television series through his career, including Sergio Leone’s classic spaghetti westerns such as Once Upon A Time In The West, while he also created the music for other films including The Good, The Bad And The Ugly, The Untouchables, The Mission, Once Upon A Time In America, Cinema Paradiso, Kill Bill and The Hateful Eight.

Morricone’s influence was also to be found in the prog world, with sax/flute player and composer Theo Travis previously saying: “His music is hugely progressive and there’s so much musical ambition, as well as development of themes, that change and reappear in a slightly altered way.

“Plus there’s wonderful orchestration, bringing all sorts of musical forces together for the sake of the musical whole. The vastness of scale makes most symphonic prog sound like your local pub band.”

Metallica famously used his track The Ecstasy Of Gold before all of their live shows, with frontman James Hetfield explaining in the mid-80s why they chose it as their intro music.

He said: “Originally we had a really dreadful tape as our intro. Just the sound of a heart with the beat getting faster. Rubbish. Then our manager at the time came up with the idea of replacing it with The Ecstasy Of Gold. And from the first time we used it, something happened. It just set us up for the night, and got the fans excited.”

Artists including Metallica, Roger Waters and Bruce Springsteen also covered the composer’s work on the 2007 tribute album We All Love Ennio Morricone.

Morricone was presented with an Honorary Academy Award in 2007 by Clint Eastwood, but had to wait until 2016 for his first Best Original Score Oscar for his work on Quentin Tarantino’s The Hateful Eight.