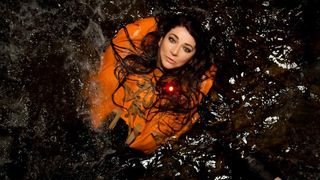 Kate Bush says she doesn’t mind her music being misunderstood – as she’d rather listeners felt something rather than understand the meaning behind her lyrics.

She’s just released a 3CD and 4LP titled Before The Dawn which was recorded during her 22-date run in London in 2014 – Bush’s first full live performances since 1979.

Bush tells The Fader: “I’m really very happy if people can connect at all to anything I do. I don’t really mind if people mishear lyrics or misunderstand what the story is.

“I think that’s what you have to let go of when you send it out in the world. I’m sure with a lot of paintings, people don’t understand what the painter originally meant, and I don’t really think that matters.

“I just think if you feel something, that’s really the ideal goal. If that happens, then I’m really happy.”

Reflecting on her decision to play live and revisit her older material, Bush reports it was an “interesting challenge” to work with The Ninth Wave and A Sky of Honey, rather than focusing on a collection of single tracks.

She adds: “It was within such a specific context, because the setlist was very much put together for a live event. Through that process, the songs naturally evolved because I was working with a band, a lot of whom I never worked with before. I just chose tracks that I wanted to do, that really worked with the band, and to keep it really focused in a rhythmic way.

“Although the music was always kept as the lead, I didn’t want the visuals to feel separate. What I had hoped was that what had been created was an integrated piece of theatre that worked with the music – that it wasn’t just music that had theatrics added to it – that there was a real sense of it being something that worked as a whole.”

Bush says that while she doesn’t listen to a lot of contemporary music, David Bowie’s Blackstar struck a chord with her this year. It was released in January – just days before Bowie died aged 69 from cancer.

She continues: “I tend to watch films or do other stuff. But one of the most powerful things that I heard recently was Blackstar by David Bowie. I thought it was beautiful. Very moving of course, but I think one of the best things he’s ever done.”

As for new music, Bush reports she has no plans at the moment, and adds: “I’ve been tied up with this project for a really long time. And right now I’m tied up with the promotion and other elements that go with getting ready to release the album.

“I’m looking forward to being in the space where I can think about what’s next.”

Last week, Bush released a video for And Dream Of Sheep.