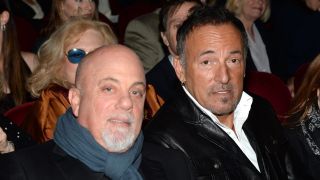 Joel told the audience at his gig at New York’s Madison Square Garden this week that he built the custom bike that Springsteen was riding when it broke down in New Jersey earlier in November.

Springsteen was rescued by a group of passing bikers and he bought them a round of drinks as a thank-you.

Now Joel – who owns a custom motorcycle shop in Long Island – says he has called The Boss to apologise.

Addressing the New York crowd, Joel says: “I built a motorcycle for Bruce. So he takes the bike out on Veteran’s Day and it breaks down. It’s all over national news, ‘Bruce’s Bike Breaks Down.’

“So I’m reading this and thinking, ‘Oh shit, I hope it wasn’t the bike I built for him.’ I called him, ‘Bruce, what bike was the bike that broke down?’

Joel was speaking after his band had played a cover of Springsteen track Born To Run. He adds: “No good deed goes unpunished.”

Springsteen this week received the Presidential Medal Of Freedom from Barack Obama at a ceremony at the White House, where he also took part in a star-studded version of the Mannequin Challenge.

Meanwhile, Springsteen will appear on BBC Radio 4’s Desert Island Discs show this Christmas. The show will air on December 18.